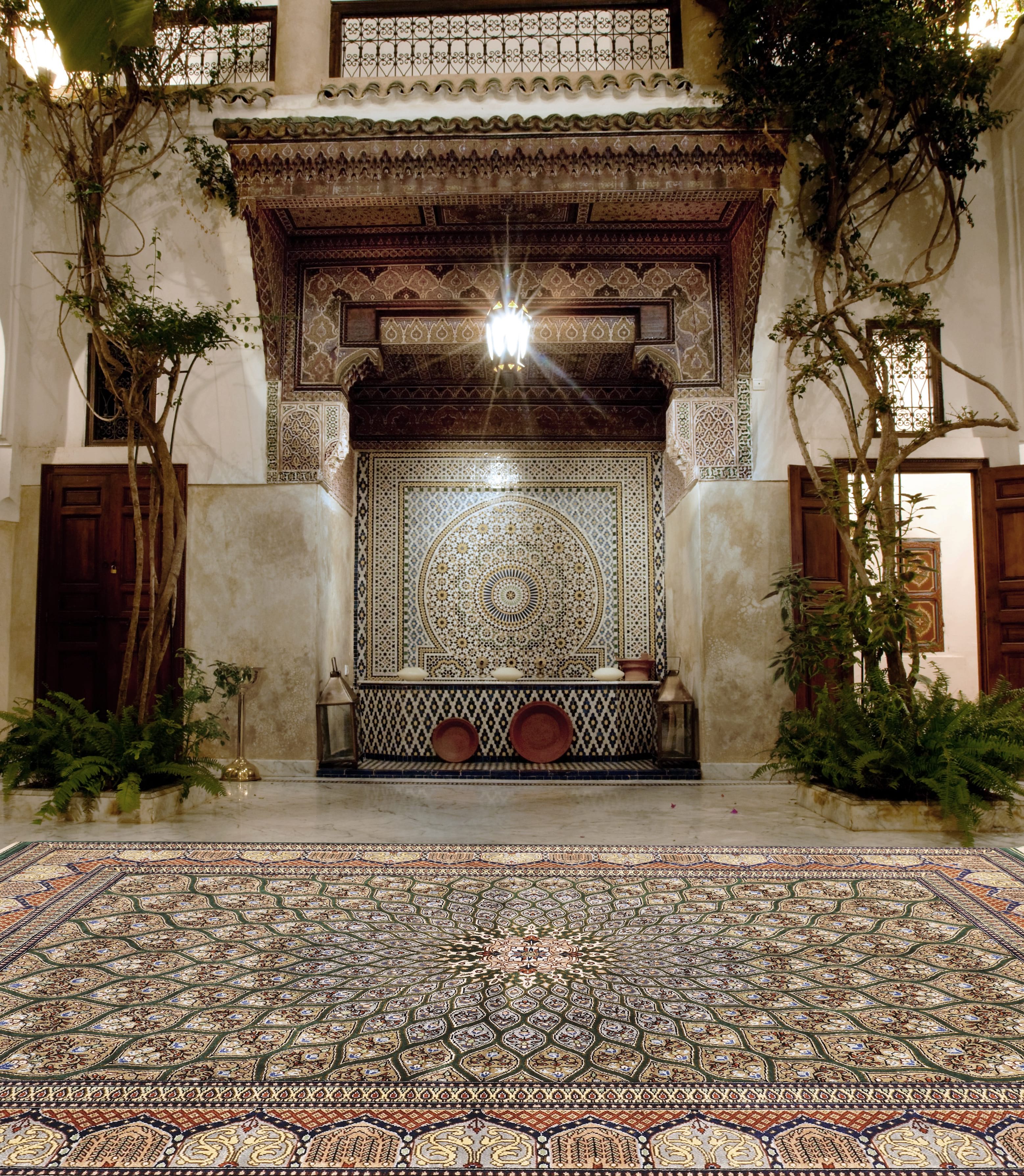 Understanding the difference in quality and price among the Qum silk rugs.

The sacred city of Qum (Ghom) in central Persia, lies around 50km from Tehran and has gained its reputation for its silk rugs. Qum rugs are produced in three different regions designating the quality of the silk used. The three types of silk, known as “Qum silk” includes Zanjan (basic quality), Maragheh (average quality) and Qum (premium quality). The above represents the name of towns where the rugs are handcrafted.

The top quality is the one made in Qum where the workmanship, the number of knots and quality of silk are significantly superior and therefore, considered the best. The majority of rugs are commissioned by famous Persian silk rugs buyers and brands who are known worldwide such as Jamshidi, Masoumi, Mir Mehdi, Zabihi, Rajabian, Javadi, among others. Then comes Maragheh, which is a town in the north-west of Iran where they also weave silk rugs, but these do not include as good quality and materials as Qum. Finally, there is Zanjan, being the least expensive between the silks as it is not only inferior in quality but also regarding the number of knots per square meter, accuracy in the design and quality of silk.

It seems the other two towns became silk weavers after Qum realising a surge in demand in Persian silk rugs. Producers from Qum would have the rugs woven in these different areas while using lower-quality materials, weave and workforce to achieve a lower price. They aimed to target those who can’t afford the original top quality silk rugs from Qum, which each rug is considered to be a work of art. The difference in price from the top Qum silk and Zanjan silk could be as much as three times!

At Rugs of London, we always offer our customers the best quality and most intricate designs in the market. If you would like to see our vast Qum silk rugs collection, please click here - Fine Qum Silk Rugs. 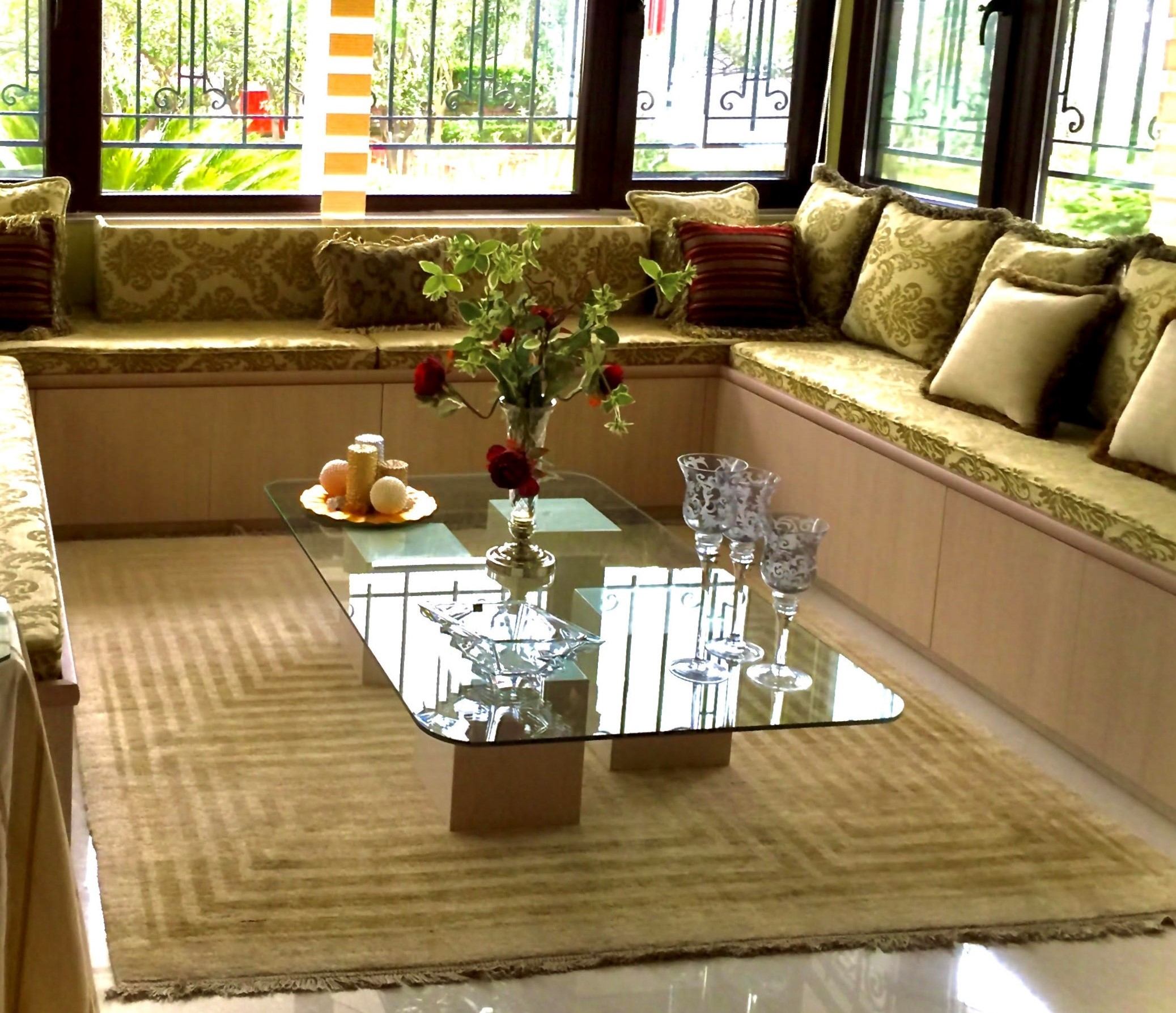 Persian rugs are often used to provide homes with a warm and luxurious look. The Gabbeh, a type of Persian rug, is gaining admirers; Gabbeh rugs are the world’s best-known Nomadic Persian rugs. Once considered "artistic and creative" by rugs dealers and merchants, interest in them has grown during the last 30 years as they become recognized for their simple beauty and charm.

The History of Gabbeh Rugs

Gabbeh means “unfinished” or “unclipped” in Farsi, the language of Persia, today's Iran. While similar to a classic Persian rug, Gabbeh has a thicker, longer pile and is not as tightly knotted. Designed to tell a story, depict a scene or convey an emotion, geometric designs and symbols ensure each rug is unique in shape and style. These tribal rugs have been woven for centuries on horizontal looms by the nomadic people of southern Iran, in the surrounding area of Shiraz. Women are traditionally the expert weavers of nomadic carpets. The rugs they create show each individual spirit and natural artisanship as she translates her life experiences into the designs of each Gabbeh she weaves. Authentic nomadic rugs, such as the Gabbeh, are almost exclusively knotted for personal use and they are so thick, they can even be used as a mattress. Gabbeh rugs are made of wool, usually, the yarn that is raised in the local area.

There are numerous types of Gabbeh designs, which are associated with each particular Kasghai tribes, such as Basic Gabbeh, Amalehbaft Gabbeh, Kashkoli Gabbeh and Luribaft Gabbeh. Distinctions of each style vary with knots per inch, the coarseness of pile, tightness of weave and sophistication of design. Natural wool is one of the most durable materials available and is stain-resistant.

Rugs should be vacuumed regularly and rotated at least once per year to ensure even wear. Professionally clean your Gabbeh rug every one to three years to rid the rug of fine grit that tends to collect in the foundation, or bottom segment of the rug. Underlay placed beneath the rug can keep it from sliding and improve its overall look.

. For any further questions or to book a cleaning or repair appointment, please call us at 02089005971 or email us at info@rugsoflondon.com 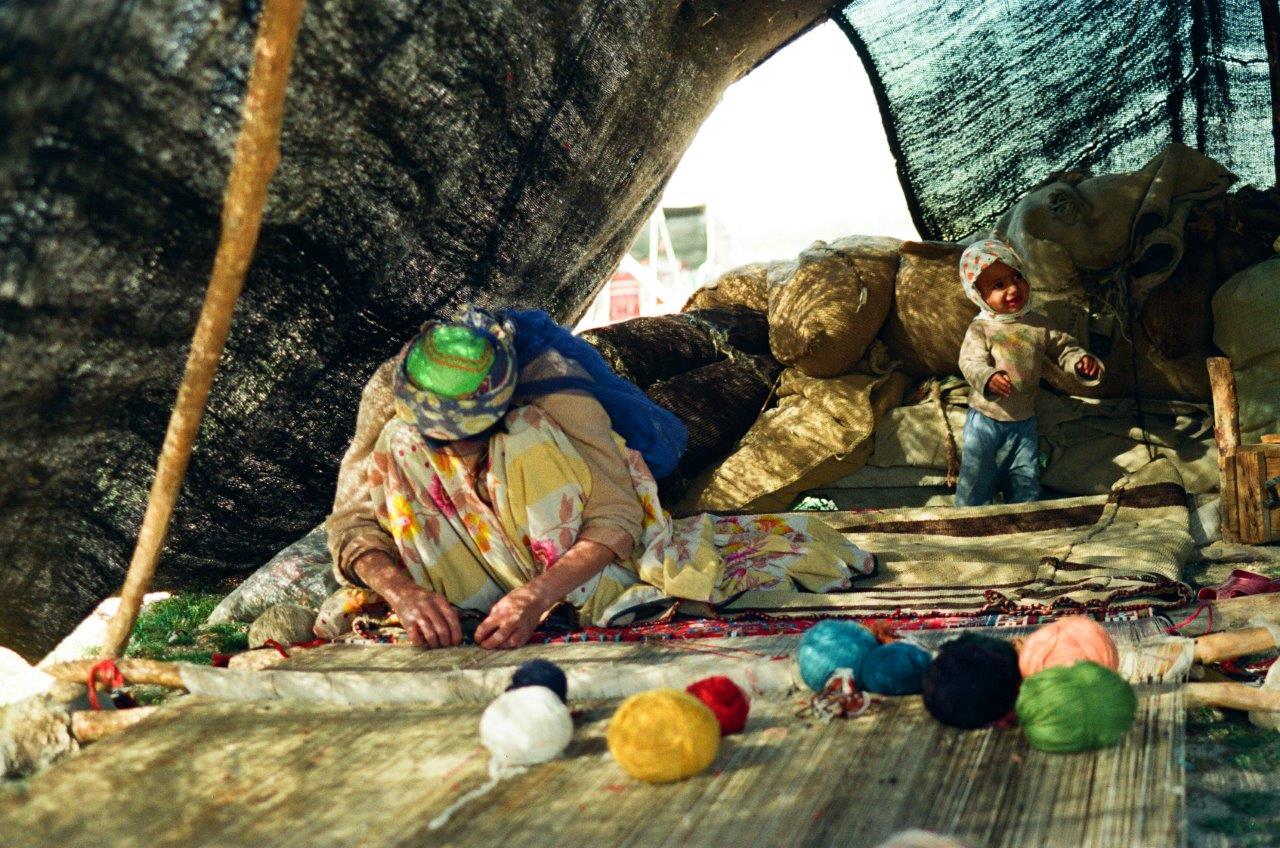 In recent years, there has been a growing interest in tribal rugs. Although many articles, catalogues books and exhibitions have appeared to introduce and promote them, they are still not known by most people. Usually, carpets and rugs are classified according to their country and place of origin, whereas tribal rugs are distinguished by the people who weave them.

Historically, nomads started to make rugs at the very early stages of their existence. Not only to protect and to cover themselves from the cold weather but also to decorate their tents. They have been using the remaining wool of their flocks, completing this way their felts, Kilims, Sumaks, carpets and other types of rugs. Their own families and traditions inspire the designs and ornaments used. Very often, the result of recycling wool turns into a genuine miraculous piece of art called tribal rug. 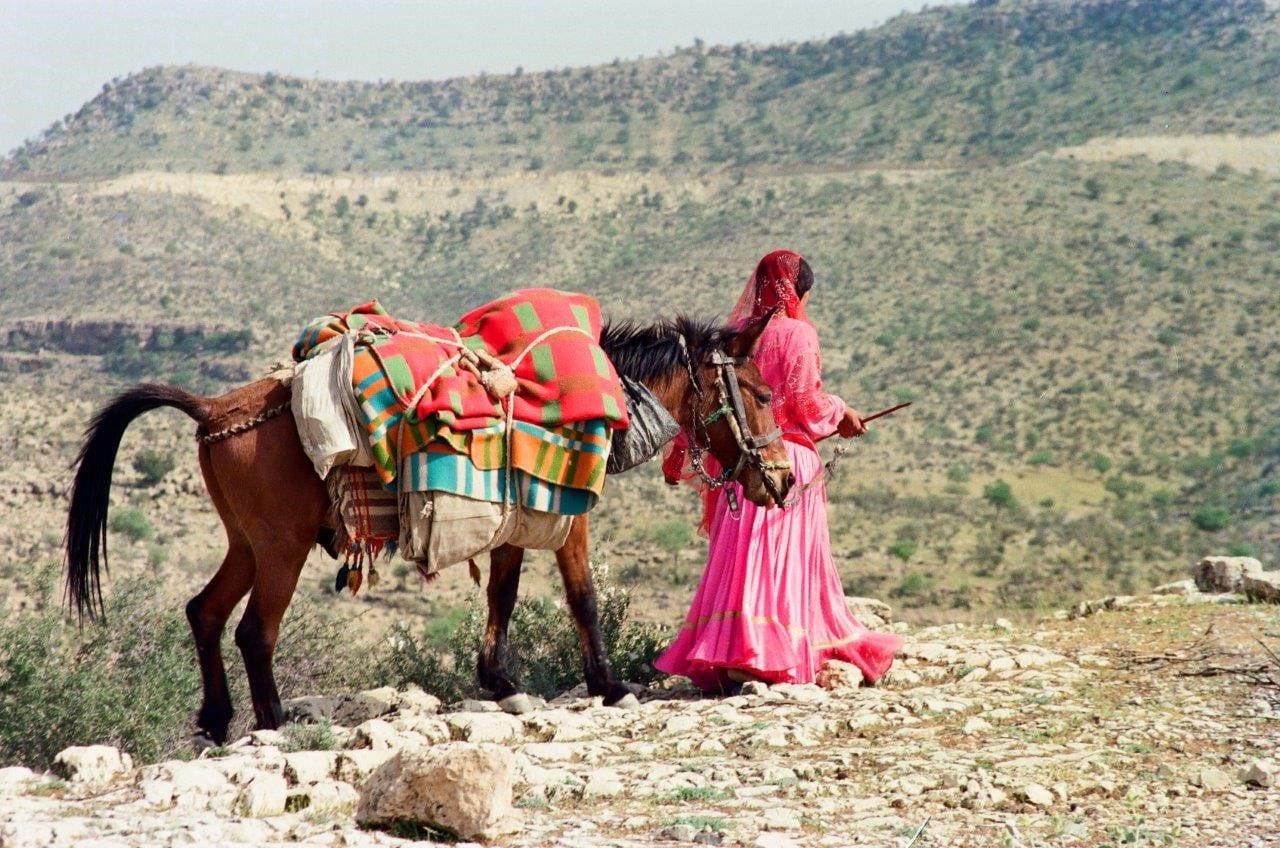 Among the most famous nomads being very rich in the carpet making, we can mention the Turkmens, existing in Turkmenistan, Iran, Afghanistan and Tajikistan. The Kashgai tribes, which are also essential in South of Iran, making mostly interesting ethnic pieces; They are neighboured by Arab and Luri tribes who have also been living in the same area.

Additionally, the Bakhtiari's, who are among the wealthiest rug producing tribes, live in the centre of Iran while the Shahsovans live in Iran as well as Azerbaijan. As for the Baluch tribes, which are found in Iran, Pakistan and Afghanistan. Afshar's are the tribes that live today in South East and North West of Iran; likewise, Kurds are also among the most well-known nomads making rugs existing living in Turkey Irak, Syria and western Iran. In addition to these are other nomads in Turkey such as Yuroks, the Berbers in North Africa, Tibetans around Himalaya, as well as Uzbeks in the East-Turkistan area, which is today located between Uzbekistan, Mongolia and north-west China.

Although most nomads are now settled around the areas that they travelled in the past, a significant part of them continues to make their traditional rugs.  Nomadic rugs are mainly made on horizontal looms, based in wool. The wool used in these rugs is hand-spun, coloured partially or entirely with vegetal dyes. These attractive unique rugs can be furnished both in a modern and traditional interior. If they are conserved and kept carefully, tribal rugs value can be maintained and even raised over time. At famous rug auctions around the world, good semi old and old nomadic pieces are often much appreciated by collectors and designers. 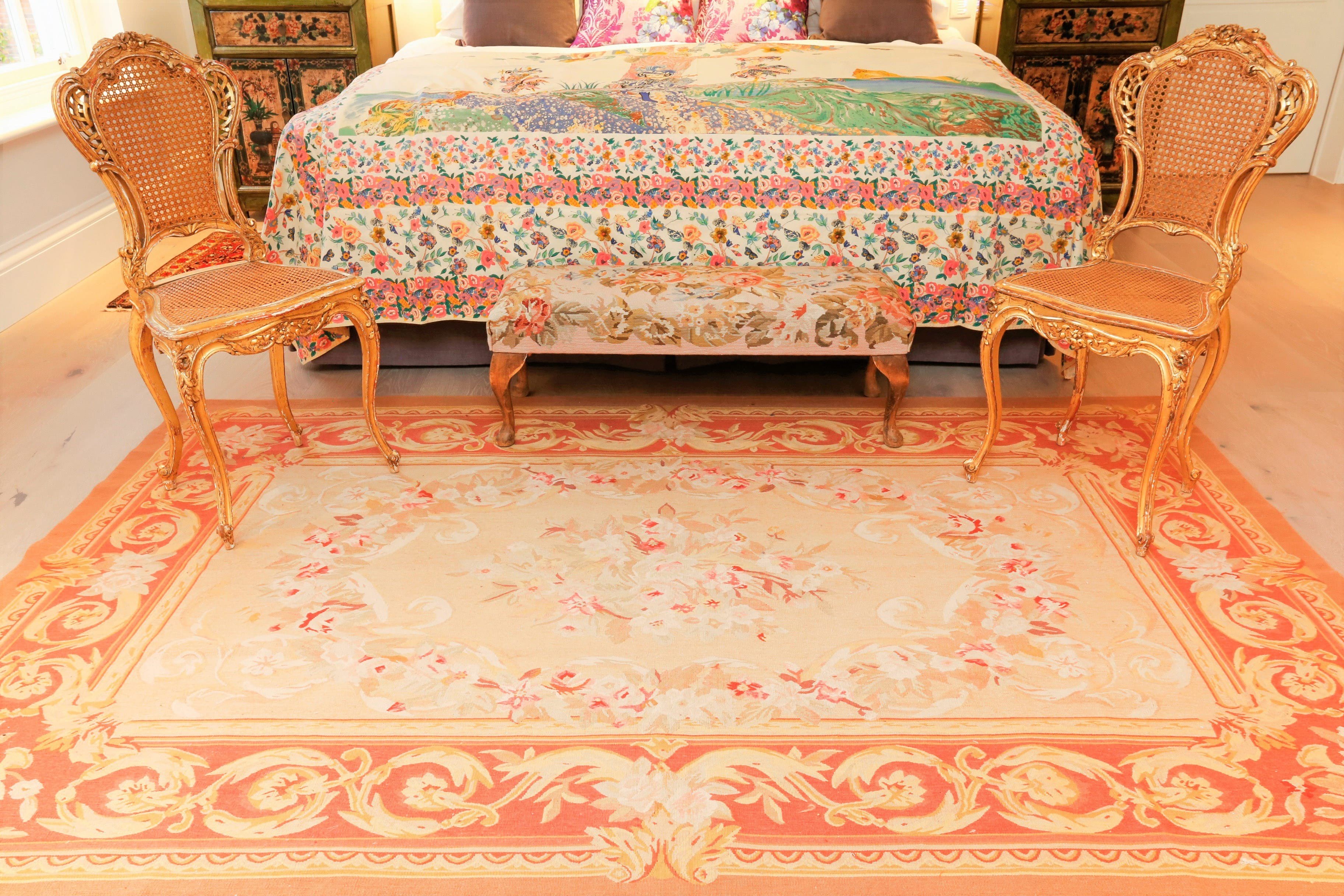 The History of Aubusson Rugs

Aubusson flatweave carpets were first introduced in the 16th century when weavers began to create carpets and Tapestries for the royal courts and aristocrat families in France. The weave of the Aubusson rug is the same as a Tapestry. They are both flatweaves, similar to kilims, except that Aubusson is made for the floor, using coarser stitch and often thicker yarn to give certain thickness and heaviness.

The Aubusson rugs are woven sideways on a loom which can be either horizontal or vertical. Even so, the final result and the weave will be the same on either type of loom. They are named after their town of birth, Aubusson, approximately two hundred miles south of Paris. It lies in a peaceful valley, protected by a hill and through it flows the river Creuse. The water of this river is particularly suitable for stabilising the dyes which are used in the rugs. Today, these handwoven flatweave carpets are tightly woven with one of the best multi-ply New Zealand wool. Using the same traditional techniques, similar style and designs as they were made centuries ago.

As each new monarch came to power, new designs reflected the styles and pastimes of the era. The design of Aubusson carpets was generally created by a well-known artist, which included depicting flowers, vases, etc. As for important tapestries, the royal courts often commissioned the work to well-known artists, such as Reuben  Raffaele including drawings of biblical and historical scenes, a series of events from specific occasions, and rooms or areas where the weavers had to follow the exact design from the coloured cartouche.

Inspired by a meticulous selection of Aubusson and tapestries antique designs, we have altered the designs, sizes and colour combinations to suit today’s space and to be able to furnish your every requirement.